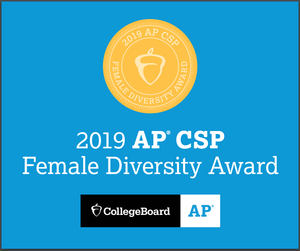 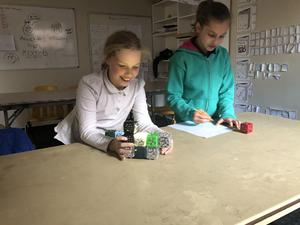 Out of the 20,000 institutions that offer AP courses, 818 achieved this important result during the 2018-2019 school year--nearly 20% more than the 685 schools recognized last year. In 2019, Hillel Academy of Pittsburgh was one of 639 recognized in the category of AP Computer Science Principles. An additional 36 schools received the award for both CSP and CSA.

“We’re proud to see the creativity, commitment, and enthusiasm our female students have demonstrated in their study of AP Computer Science Principles,” said Rabbi Sam Weinberg. “As educators and administrators, we believe a STEM education plays a critical role in fostering a lifelong relationship with learning and setting our female students on a path to success in a 21st century workforce.”

Schools receiving the AP Computer Science Female Diversity Award have achieved either 50% or higher female representation in either or both of the AP computer science courses, or the percentage of female computer science examinees meets or exceeds that of the school’s female population.

“Hillel Academy of Pittsburgh is empowering young women to see themselves as creators, innovators, and problem-solvers,” said Stefanie Sanford, College Board global policy chief. “We hope to see even more high schools inspire female students to harness the potential of an AP computer science education.”

The introduction of AP Computer Science Principles in 2016 was the largest course launch in AP Program history. In 2019, nearly 100,000 students took the AP CSP exam, more than doubling participation in three years. During that time, the number of female AP CSP students has far outpaced overall growth, with an increase of 136%.

Providing female students with access to computer science courses is necessary to ensuring gender parity in high-paying technology jobs and to drive innovation, creativity, and competition. A 2014 Google study found that women are more likely to pursue computer science if they are given the opportunity to explore it in high school.

About Hillel Academy of Pittsburgh

The mission of Hillel Academy of Pittsburgh, an Orthodox Jewish Day School, is to graduate young men and women with unlimited capacity to compete in a superior manner in any challenge they undertake, who are G-d fearing, Torah observant models of exemplary character, who love G-d, the Jewish people, and the State of Israel and possess a love of learning, confidence and the ability to think critically and serve as active members and leaders of the Jewish community and of society.